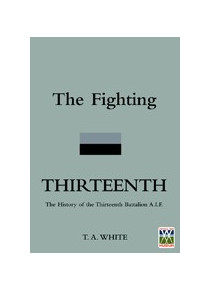 “FIGHTING THIRTEENTH The History of the 13 Battalion A.I.F. '
by Captain Thomas A.White.﻿

FIGHTING THIRTEENTH The History of the Thirteenth Battalion A.I.F.  by Captain Thomas A.White. Before the war, White was a Headmaster, with a Degree from Sydney University. He had previous military training with the University Scouts and the 13th Battalion Militia.

Thus, when he joined the 13 Battalion AIF in 1916, he was commissioned as a 2nd Lieutenant. At Villers Bretonneax on the 20th May 1918 he was wounded by a bomb dropped from a German aircraft. After the war he returned to Australia continued teaching and completed writing this history in 1923. He died in 1962.

This is the Official Battalion History which was compiled and written with the assistance of the 13th Battalion Committee, numerous battalion members, and many written documents/diary/information. Written by one who was there in the trenches. The book was first published in 1924.
This book is a professionally produced reprint of that history.

It is a true reproduction of the 1924 1st edition. Of course the value of an
original copy of this history is close to one thousand dollars. Even these reprints
escalate in value when they also become out of print.
Here is your chance to obtain this book that can be treasured as a hand me down Family History Book.
Follows the 13th Battalion 1st AIF history from its formation in Sydney New
South Wales. The Battalion was raised in September 1914 as part of Monash’s
4th Brigade. It took part in the bloody fighting at ANZAC and then, after the
reforming of the AIF back in in Egypt, moved to the Western Front. It served
in the successful Australian actions at Pozieres, the debacle at Bullecourt, and later Messines and Passchendaele.

The black days of the 1918 German offensive are well described,as are the final attacks against Hamel and the Hindenburg Line. Two members of the Battalion were awarded the VC, Capt. H. W. ' Mad Harry ' Murray and Sgt. M. V. Buckley.
The horrors of life in the trenches are lightened by amusing dialogue and anecdotes.
Lists of awards and casualties appear at frequent intervals throughout the history.
The book names many non commissioned members of the Battalion throughout the
text.

By end of the war, the 13th Battalion had suffered casualties of 1,090
killed and 2,128 wounded. It was disbanded in 1919.
A very detailed text supported with maps, diagrams, b&amp;w pic Illustrations.

Abbreviated History 13th Battalion
The 13th Battalion AIF was raised from late September 1914, six weeks after   the outbreak of the First World War. The battalion was recruited in New South   Wales, and with the 14th, 15th and 16th Battalions formed the 4th Brigade, commanded by Colonel John Monash. The Brigade embarked for overseas in late December.
After a brief stop in Albany, Western Australia, it proceeded to Egypt, arriving   in early February 1915. Australia already had an AIF division there, the 1st.   When the 4th Brigade arrived in Egypt it became part of the New Zealand and   Australian Division. The 4th Brigade landed at ANZAC Cove late in the afternoon   of 25 April 1915. From May to August, the battalion was heavily involved in   establishing and defending the ANZAC front line. In August, the 4th Brigade   attacked Hill 971. The hill was taken at great cost, although Turkish reinforcements   forced the Australians to withdraw. The 13th also suffered casualties during   the attack on Hill 60 on 27 August. The battalion served at ANZAC until the   evacuation in December. After the withdrawal from Gallipoli, the battalion returned   to Egypt. While in Egypt the AIF was expanded and was reorganised. The 13th   Battalion was split and provided experienced soldiers for the 45th Battalion.   The 4th Brigade was combined with the 12th and 13th Brigades to form the 4th   Australian Division. In June 1916, the 13th sailed for France and the Western   Front. From then until 1918, the battalion took part in bloody trench warfare.
Its first major action in France was at Pozières in August. In February 1917,
Captain W. H. Murray, who had transferred to the 13th from the 16th Battalion,
earned the Victoria Cross for his actions during an attack near Gueudecourt.   He became one of the most highly decorated officers in the AIF. The 13th Battalion,   along with most of the 4th Brigade, suffered heavy losses at Bullecourt in April   when the brigade attacked strong German positions without the promised tank   support. The battalion spent much of the remainder of 1917 in Belgium advancing   to the Hindenburg Line. In March and April 1918, the battalion helped to stop   the German spring offensive. It subsequently played a role in the great allied   offensive of 1918, fighting near Amiens on 8 August 1918. This advance by British   and empire troops was the greatest success in a single day on the Western Front,
one that German General Erich Ludendorff described as “..the black day of the
German Army in this war...”. The 4th Brigade continued operations until late
September 1918. On 18 September Maurice Buckley, serving as Sergeant Gerald
Sexton, was awarded the Victoria Cross for valour near Le Verguier. At 11 am
on 11 November 1918, the guns fell silent. In November 1918 members of the AIF
began to return to Australia for demobilisation and discharge..
Battle Honours Include:
# Somme 1916 # Somme 1918 # Pozieres # Bullecourt # Messines 1917 # Ypres 1917
# Menin Road # Polygon Wood # Passchendaele # Arras 1918 # Ancre 1918 # Hamel
# Amiens # Albert 1918 # Hindenburg Line # Hindenburg Line # Epehy # France
and Flanders 1916-1918 # ANZAC # Landing at ANZAC # Defence at ANZAC # Suvla
# Sari Bair ﻿
Click to view Wiki page 13th Battalion History 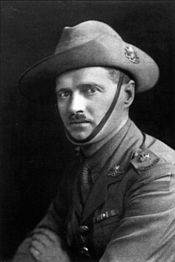