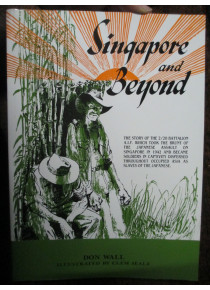 Singapore and Beyond History of the 2nd 20th Battalion AIF WWII

Singapore and Beyond ' by Don Wall . This is the history of the 2nd 20th Battalion AIF which took the brunt of the Japanese assault on Singapore in 1942, After the Fall of Singapore the soldiers became POW's dispersed throughout occupied Asia as slaves of the Japanese. The first edition of this book was published in 1985 and this book was printed in 2000.

This is a full Battalion History which starts with the initial set up of the Battalion in July 1940 and ends with the Home Coming of the surviving members in 1945. In between those two events there are 370 pages of information relating to the members and their battles. A New South Wales Battalion it was made up of men from North Coast Sydney, Newcastle but there was a fair amount of members from country NSW. After training the Battalion was sent to defend Malaya / Singapore . They fought a fighting retreat against superior Japanese forces down the Malaya Peninsular. Until the final surrender of the Battalion in Singapore. Initally held captive in Changi they were split into groups which were sent to work on the Burma Thailand Railway from 1943 to 1945. During which time some members were transported on the 'hell ships' to work in the coal mines and factories of Japan where they suffered the coldest winters Japan had experienced. The conditions were so bad that the men wished to be back in the jungle camps of Thailand despite the risks involved. The Battalion had no survivors from the death marches on Borneo where they lost over 100 men of the 2002 perished. Importantly, this book also provides a full Honour Roll and Rolls naming all the men from the Battalion that were sent to the different POW camps.

A large Battalion History lavish in both text and named soldier pics. Important addition to the research library of any serious medal collector and/or military historian.