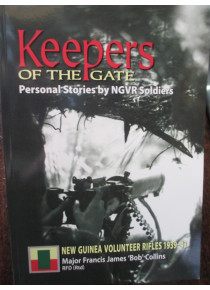 New Guinea Volunteer Rifles (NGVR) was a WW2 infantry battalion of the Australian Army.
This history is Dedicated to the Memory of those Men Who Served in the New Guinea Volunteer Rifles during the Pacific war. The NGVR numbered around 300 men who were mainly Australian ex-pats living in Papua New Guinea. During World War II the unit earned three Battle honours: Rabaul, Wau and Southwest Pacific 1942-43.

In early 1942 a detachment﻿ of the unit became involved with Lark Force (2nd 22nd Battalion) in defending Rabaul. Sub-units of the NGVR were located at Wau, Salamaua, Lae and Madang.﻿

Men of the NGVR﻿ were actually among the first Australians to oppose the invading Japanese Army on Australian controlled territory. Within days of the first Japanese air attacks, Rabaul had fallen to the Japanese. Many NGVR were taken POW and later died when being transported on the Japanese naval prison ship Montevideo Maru which was torpedoed﻿ ﻿by a US submarine.﻿

The sub units of the NGVR continued to fight the Japanese at Lae, Salamaua, Wau, Bulolo, Markham and Madang.
This book records the true stories of the men who made up the New Guinea Volunteer Rifles during the perilous early months of the New Guinea campaign.﻿ Many of their operations were undertaken in association with the Independent commando units.﻿

These true stories include topics such as the Tol Massacre, jungle warfare, NGVR Navy, ANGAU, Kanga force and Lark Force.﻿

A very large book of 400 pages, which has been printed on superior antiaging high quality paper.﻿ This book would be of high interest, to anyone seeking research information about the Australian New Guinea campaign.﻿﻿﻿