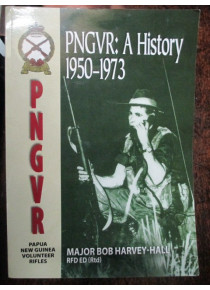 This story reveals how expatriates formed the defence of PNG from the early 1950s, just after WW2. In early 1951 a small group of Australian officers and non-commissioned officers arrived to assist﻿ in the formation of the unit. The Battalion provided the initial defence of the country and assisted to re-establish the Pacific Island Regiment. The Battalion's role was expanded and Papua New Guineans were welcomed enlistments.

Between 1951 and 1953 PNGVR elements were established in all the main centres in PNG﻿. During the 1960s,﻿ Australian concern about Indonesian intentions during the Indonesia–Malaysia confrontation saw increasing defence resources allocated to PNG﻿. By 1969 only one-fifth of PNGVR members were of European descent﻿.﻿

As the country rapidly moved towards its own independence, there was no need for an Australian CMF unit in PNG and the unit was disbanded.﻿

This is a large history which is complemented with numerous photos, unit group portraits. The narrative concludes with a full nominal roll of members.﻿