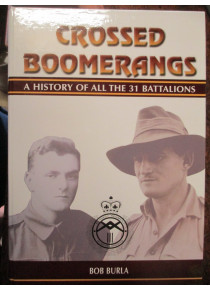 Crossed Boomerangs - A History of All The 31 Battalions by Burla

Crossed Boomerangs - A History of All The 31st Battalions by  B. Burla﻿

The 31st Infantry Battalion has existed in one form or another for over a century and has suffered various reorganisations and titles throughout its long history.

During the two World Wars, while serving with the Battalion, Private Patrick Bugden and Private James Gordon both earned a Victoria Cross, while ex-member, WO Keith Payne deployed with ‘The Team’ in Vietnam, was also awarded the VC.

The spirit of the 31st inspired generation after generation of young men to share in the ethos of service to the Battalion and Australia, many going on to fight with distinction in other units.

This book records the long history of a Battalion and men who served in it – sons of North Queensland.

As the book covers all of the various 31st Battalions and Militia ﻿throughout the different wars this is a huge book of 611 pages.
The appendixes include Honour Rolls through the various wars and Awards for Bravery includes commendations﻿. All of the battles are detailed please see attached pic of the contents. ﻿

As it has such a wide historical coverage this book has become increasingly difficult book to obtain.﻿
Out of Print not to be reprinted. This price is for a brand new book (been in storage) - value here as the market price for 2nd hand books is far greater.