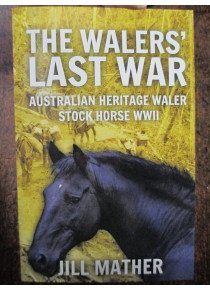 Historical references about how, where and with what units the Australian horses were used during WW2. Sections about Merrill's Marauders, Northern Australian Observer Unit, Nackaroos, the Independent Light Horse Troop to name a few mentioned. The book covers the many uses of the horse on Kokoda, China, Northern Australia,Papua New Guinea, New Caledonia, The Philippines, and the south western Pacific Islands.

The famous Australian heritage stockhorse is remembered. The journey of these tough, resilient horses in yet another war has been overlooked in the many accounts of battles in the South West Pacific when the threat of a Japanese invasion was imminent. Once more our Walers were in high demand. Thousands left our shores to horse armies stretching from China to Australia’s northern shores. ﻿