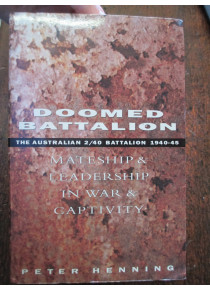 This is the story of a near 1000 Australian soldiers of the 2/40 Battalion - mainly Tasmanians - who were sent to garrison an airfield in Dutch Timor immediately after the Japanese entered the Second World War. Assigned a hopless military task with a misguided strategy, they were captured a week after the fall of Singapore in February 1942.

For the next three and a half years they were more thoroughly scattered in prison camps throughout Asia than the men of any comparable Australian unit. Their experiences represent a microcosm of the experience of Australians in Japanese hands in the Pacific theatre. Using a combination of documentary material and interviews, the book represents a reconstruction and analysis of the fighting in Dutch Timor.

It is a study of the complexities of the prisoner of war experience: the psychology of incarceration; the nature of prisoners' relationships with other Australians, their officers and prisoners of other nationalities; and the operation of mateship and leadership under extreme hardship.