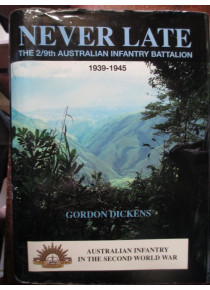 This war book is the 9th Battalion History of the Second AIF. Formed in November 1939 the 2/9th was the first battalion raised in Queensland and it fought in Giarabub and Tobruk in North Africa, Milne Bay, Cape Endaiadere and Sanananda in Papua, on Shaggy Ridge in New Guinea and at Balikpapan in Borneo.

Over six years of war and seven campaigns the Battalion suffered 975 battle casualties but never lost a man as a prisoner of war and carried every on of its casualties from the field. Those who did not return home lie remembered in carefully tendered graves around the world.

As the successor to the 9th Battalion of the First AIF, the 2/9th wore a rectangular colour patch of Black over Blue with the border of grey that signified the Second AIF. In the years since the end of the war the fact that they wore the Black over Blue has been a great source of pride to the men of the 2/9th Battalion.
NOW OUT OF PRINT