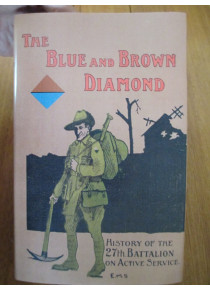 The History of the 27th Battalion AIF WW1 27 Battalion

History of the 27th Battalion AIF

The Battalion was formed at Ascot Park Adelaide in March 1915 and then moved to a new camp located at Mitcham. This history records the activities, operations and men of this Battalion throughout the war.
From the basic training of the men at Mitcham, overseas training in Egypt, through its many battles, at Gallipoli and the Western Front. For those 3+ years the infantry of the Blue and Brown Diamond, 27th Battalion endured the worst conditions of that so called Great War.

Over 7000 men would march through its ranks. Over 800 would be killed, 2000+ wounded and that's not to talk of the human carnage after the war.
This is Their Story....

On the 12 September 1915 the Battalion landed at Anzac Cove to reinforce the position after the costly August Offensives. The Battalion manned a defensive position known as Cheshire Ridge.
Later occupying trenches at Walker's Ridge.
The Battalion was then one of the first Australian units to enter the European conflict on the Western Front. The 27th Battalion entered the front-line trenches for the first time on the 7 April 1916. The unit's first major Battle was at Pozieres on the Somme Battlefield between 28 July and 5 August 1916. Again in early November 1916, it fought another costly battle on the Somme at Flers. Followed by, Gueudecourt, Deville Wood, Largnicourt, Bullecourt, Menin Road, Polygon Woods, Broodseinde, Passchendaele, Morlancourt, Villers Bretonneux and the August 8th 1918 Amiens Advance. The Battalion's last actions of the war were fought as part of the effort to break through the Beaurevoir Line in the first week of October 1918

Personal veteran recollections are recorded throughout the book.

Each of the Battalion's battles and other major activities are well documented with details of the operations and naming of individuals prominent during the battle.

In the Appendixs is full of named members, an Honour Roll, a List of Members of the 27 Battalion Decorated during the War,  an additional Roll of  Battalion members.

First printed in 1921 by the 27th Battalion Club, AIF Association. The first edition of this book is extremely rare. This book is a facsimile digitized reproduction of the original book. Compared to most facsimile books you will find the print on this book to be crisp, black and clear.

The book has been professionally made with sewn and glued binding (not hot melt), headbands top and bottom. The hard covers have been finshed in real brown buckram - insect and water resistance to modern standards. Titles are adorned in gold foil. Complete with outer dust jacket in the style of the 1st edition. Superior coated 100 gsm paper (anti ageing) used throughout.

We are happy to check if a family member is shown in 'The Roll'.

Don't miss this chance to add an important unit history to your
research collection.!
Rest assured this is a quality made book of which the value never decreases....

This is Volume I which is a replica of the 1st edition printed in 1921, click to see Volume II is a separate Pictorial History of the Battalion (never before printed).