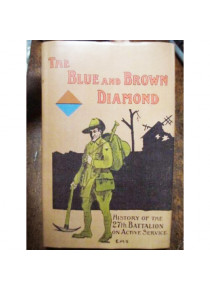 The Pictorial History of the 27th Battalion AIF Volume II

This is a newly created book which is a Pictorial companion Volume II to the original Blue and Brown Diamond History the 27th Battalion AIF﻿.

When the original﻿ 27th Battalion History was first published in 1921, the cost of printing photographs was very expensive. Thus most of the photographs taken by Battalion members were never used in the printing of the Battalion history.
Guy Dollman who is the grandson of the original author and commanding officer, Colonel Walter Dollman, has collected a large quantity of original photographs from Battalion members.
Many are from Colonel Walter Dollman's private photograph collection and have never before been printed.
In the book there are over 200 printed photographs all relating to the history of the 27th Battalion World War I.

30+ photographs, are soldier group portraits, these are grouped into three sections, photographs of the original Battalion at Mitcham Camp Adelaide in 1915 before embarkation, the available Reinforcements group pictures (2nd,3rd, 4th,5th,9th,11th,16th,17th,20th, reinforcement groups shown) and 8 photographs taken of the Battalion members at Mont-sur-Marchiene Belgium in late December 1918.
There are 13 narrative chapters to the book, these include chapters to the Fallen, biographical information on several of the men who were killed while serving with the Battalion. Photographs in this section include Memorial cards to soldiers and original grave cross photographs. Men of Valour covers the highest decorated soldiers of the Battalion. Photographs in the Gallery are shown in chronological order of the war. There are photograph sections on Officers in Egypt, Gallipoli Scenes mainly taken in the vicinity of the Battalion's defensive position at Cheshire Ridge.
Other narrative sections of book mainly concentrates on the history of the Battalion members after they returned to Adelaide. Thus there are chapters about the 27th Battalion AIF club, The Last Man Standing and the Last Anzac of the 27th Battalion.
Prominent identities of the Battalion who become well-known after the war are shown in particular, Tom Playford (long serving Premier of South Australia) and Baronet Sir Leslie Boyce.﻿ Biographical information about the life of both authors during and after the war.﻿

Numerous names of soldiers are mentioned throughout the narrative.﻿

The book has been professionally made with sewn and glued binding (not hot melt), headbands top and bottom. The hard covers have been finshed in real brown buckram﻿ - insect and water resistance to modern standards. Titles are adorned in gold foil. Complete with outer dust jacket in the style of the 1st edition. Superior coated 100 gsm paper (anti ageing) used throughout.

This is a Limited Edition print.

Don't miss this chance to add an important unit history to your
research collection.!﻿
Rest assured this is a quality made book of which the value never decreases....

This is Volume II a Pictorial History of the Battalion ﻿(never before printed).
Click here to see Volume I which is a replica of the 1st edition printed in 1921.﻿﻿