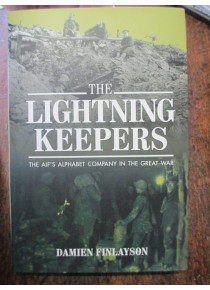 The Lightning Keepers The AIF's Alphabet Company in the Great War by D. Finlayson

At the conclusion of 1917 the Mining Companies were disbanded and the men transferred back to the engineering units. Some of those members transferred directly into the Australian Electrical and Mechanical Mining and Boring Company. So this history should be of interest to all those who have previously read books about the tunnellers, Hill 60  operations/individuals﻿ during WW1.

The author's previous work, Crumps and Camouflets, was widely read as a history about Australia's tunnellers. This book thus follows the exploits of some of those brave miners.

Recently the book was reviewed by the AWM's, Graig Tibbitts who said of the work, 'the author is clearly very knowledgeable about the underground war and does an excellent job of explaining how and why everything happened.'

Few soldiers on the Western Front had heard of the Australian Electrical and Mechanical Mining and Boring Company, even after it had been renamed the ‘Alphabet Company’ by an AIF wag. Yet many knew the work of this tiny unit which numbered fewer than 300 at full strength. Despite its small size, the Alphabet Company’s influence was enormous and spanned the entire British sector of the Western Front, from the North Sea to the Somme.

The Lightning Keepers: the AIF’s Alphabet Company in the Great War is the story of the ‘Alphabeticals’ who, led by Major Victor Morse, DSO, operated and maintained pumps, generators, ventilation fans, drilling equipment and other ingenious devices in extreme circumstances. Given the horrendous conditions in which the troops lived and fought, this equipment was desperately needed, as were the men who operated it in the same, often nightmarish setting.

This is the first account of the dynamic little unit that was the Alphabet Company, a unit that has been neglected by history for a century. It is the story of the men, their machinery and the extraordinary grit they displayed in performing some of the most difficult tasks in a war noted for the horrific conditions in which it was waged. They do not deserve to be forgotten.