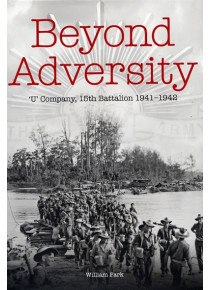 This war book although the History of the University section of the 15th Battalion Militia the book forms a valuable research document for the overall 15th Battalion.

In November 1941, about 100 University Of Queensland students began their short-term compulsory military training with the 15th Infantry Battalion. Most were aged 19-22, had daytime jobs and were evening or external students from the arts, commerce and law faculties. They were ambitious, hard-working young men anxious to make their way in the world.

Their compulsory military training was due to end on 4 February 1942 and the students would then be released to return to their jobs and continue their part-time studies. The outbreak of the Pacific War on 7 December changed everything. In April 1942, the 15th Battalion was given 24 hours’ notice to move from Caloundra to Townsville. This was to ready for the pending invasion of the Japanese at Townsville. In January 1943, the Battalion went to Milne Bay New Guinea to take part in the Salamaua and Lae campaigns and in November the Battalion fought in the Battle of Bougainville. The Battalion finally returned home in January 1946.

After the war, most returned to resume their studies and jobs within the community. While the army saw these men as best employed as infantry soldiers, the summary of their later lives is populated with professors, managing directors and chief executive officers, lawyers, doctors and captains of industry. Count the numbers who have received an honour or award or have been decorated for their extraordinary achievements and the proportion is simply staggering.

This book tells the story of those Queensland University students of ‘U’ Company, 15th Battalion during its brief existence.