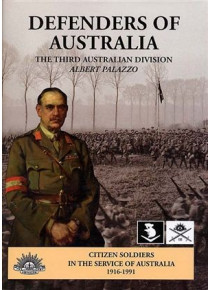 Defenders of Australia The Third Australian Division 1916-1991﻿ by A. Palazzo﻿

This Australian military book is the History of the 3rd Division from 1916 to it being disbanded in 1991.

Of the Australian Army's citizen soldier formations, the longest serving was the 3rd Division. It was raised in 1916 and fought with distinction in the trenches of the Western Front in World War I. Between the two World Wars the 3rd Division remained vigilant to  the looming danger of the militaristic juggernauts of Germany and Japan. Its members prepared to face the coming threat. When World War II began, the Division again came forward, first to help form the 2nd Australian Imperial Force AIF, and later to turn back the Japanese threat from the north. Throughout the Cold War the 3rd Division again awaited the government's summons, a call which fortunately never came.

In 1991, after 75 years of service, the 3rd Division was disbanded. With its passing, a great and distinguished formation of the Australian Army came to an end. Yet while the 3rd Division is no longer a part of the Army, its memory, traditions and battle honour live on, and the spirit of the citizen soldier continues to shape the future of Australian defence.