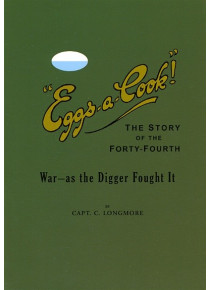 Battalion History of the 44th Battalion of the Third Division

"Eggs-a-Cook!" The Story of the Forty-Fourth: War as the Digger Fought It﻿
by C. Longmore﻿

The military Book ' Eggs-a-Cook! is a Battalion History of the 44th Battalion of the Third Division in France during 1916-1918.

The 44th Battalion was raised at Claremont, Western Australia in February 1916. It formed part of the 11th Brigade of the 3rd Australian Division, and soon became known as “Old Bill’s Thousand” after its first commanding officer, Lieutenant Colonel William Mansbridge.

The battalion left Australia on 6 June and proceeded to Britain for further training. It arrived in France on 27 November and entered the front line trenches of the Western Front for the first time on 29 December. Longmore details their experiences in the Armentieres sector, 'Plugstreet,' Messines, Broodseinde Ridge, Paschendale, Corbie, Hamel, Bray, and the Somme.

The battalion fought in its first major battle at Messines, in Belgium, between 7 and 10 June. In the months that followed it was heavily employed in the Ypres sector, taking part in another major battle to capture Broodseinde Ridge on 7 June, and participating in costly defensive operations in horrendous conditions. Of the 992 men from the battalion who were involved in the Ypres operations, only 158 emerged unwounded when it was relieved for a rest on 21 October.