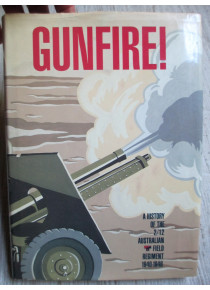 Formed in May 1940 in Melbourne with a nucleus of militiamen and coastal gunners. The unit served with the Ninth Australian Division in four campaigns, Tobruk, El Alamein, Lae, Huon Peninsula New Guinea and Labuan Island North Borneo.

The Regiment fired over 358,000 rounds during hostile action.

See pics been signed by the Medical Officer, veteran of the Regiment