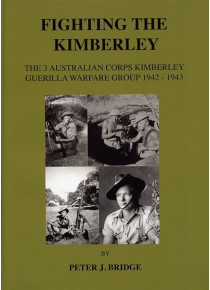 This military book is a regimental history of Major Mitchell's 3rd Australian Army Corps Guerilla Warfare Group, 101 Field Security, Special Duties Groups, Special Independent Guerilla Warfare Company, Volunteer Defence Corps, 11 North West Battalion, and the Derby Garrison in the defence of the Kimberley and the North West. The book covers the period after the Japanese attacks on Broome and Darwin.

Containing previously unseen material on this secret group which includes letters, diaries, reports and photos on Broome, Derby and the North West. The West Australian's war correspondent's diaries, the creation of the Black Guard of Liveringa VDC, 101 Field Security and their tragedy, 29th Garrison, bios of all the men and a nominal roll compiled by Gail Stewart.

Over the last 60 or so years many have talked of this secret group but due to a thorough destruction of files very little information could be obtained. Now the blackout has been lifted by access to personal reminiscences, diaries and photos. This new information even surprises those who thought they knew of the activities of the military in the Kimberley in what were dark and worrying days of the Japanese advance.

Major Mitchell, the commander of the unit, is the same George Mitchell MC DCM of WW1 AIF fame for action with the 48th at Bullecourt. Author of well know book , 'Backs To The Wall'.

A large book of 336 pages large format A4 pages, is well supported by a large collection of period photos.