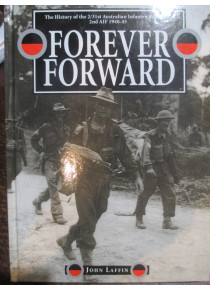 This military book is a Battalion History book of the  2/31st Australian Infantry Battalion.

The author John Laffin who was one of Australia's most respected military historians was a member of this battalion.

During th lifetime of the Battalion it took on the strength of 151 officers and 2509 men. Of this total, about one in three members of the battalion became casualties for one reason or another. This is one of the highest casualty rates in the AIF during WW2.

This reprint of 'Forever Forward' tells of the wartime experiences of the 2/31st in in their Middle East campaigns, on the Kokoda Track, the siege of Gona, Ramu Valley, Shaggy Ridge and the final battles at Balikpapan.

Well written, and with numerous photographs included, as well as a nominal roll and index, this book is dedicated to the men of the battalion who fought, but never returned.