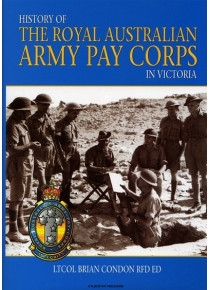 History of the Royal Australian Army Pay Corps in Victoria

In August 1955, the author, Pte B.T. Condon joined the Pay Corps. Brian remained with the Corps for many years and on retirement as a Lieutenant Colonel, was appointed Colonel Commandant a position he held for six years before commencing to write the 'History of the Royal Australian Army Pay Corps in Victoria'.

This book records the history of the Pay Corps from its beginnings in the Colonial period through the Boer War, the Great War 1914-1918 and the Second World War. It is also a detailed record of the actives of the Corps in the post-War period and includes the Korean War, Malaya, Borneo and Vietnam conflicts as well as National Service through to the current day.

This is a complete record of the Corps (Citizen Military Forces, Army Reserve and the Australia Regular Army) and its people and is a must of all those who have served in the Corp. It is also a detailed record of the Corps activities both military and civilian and with the passage of time this will become a major source of reference for future generations.