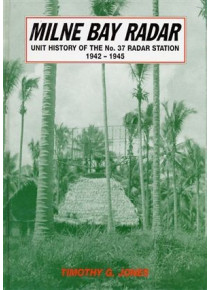 Milne Bay Radar: Unit History of the No. 37 Radar Station

The author of this book, Tim Jones, was a member of No. 37 Radar Station and witnessed many of the events that befell the unit. He carried a camera with him and most of the previously unseen photographs in this book are from his own collection.

Tim has employed the limited official records, the few publication that have been produced on the period and the diaries and recollections of his fellow members, to produce a concise history of the unit and its part in the Milne Bay battle.

Due to the efforts of Tim Jones and his comrades from No. 37 Radar Station, the true facts of this part of RAAF history have now been rectified.