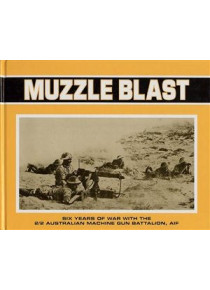 This war book is a Battalion History of the 2AIF 2 Machine Gun Company. The author served with the 2/2 Machine Gun Battalion during its Desert Campaigns North Africa, New Guinea and was on Tarakan with Brigadier Whitehead's 26th Brigade, which included Don Company of the machine gunners, when the war ended.

This reprint traces the formation of the 2/2 Machine Gun Battalion and follows the men through to war's end in 1945. The machine-gunners were part of the 9th Division in the Battle of El Alamein where a very desperate struggle ensued before the final battle was won.
An in depth battalion history which is a memorial to these fine men. Concludes with named group photo plates of each of the companies, honour roll, nominal roll and awards.
Exceelent book for all intereseted in the Australian machine gun battalions of WW2.