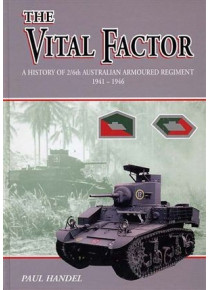 The 2/6 Australian Armoured Regiment pioneered the use of tanks in jungle warfare in New Guinea. Using US-made Stuart Light Tanks, designed for open-country warfare, they achieved a breakthrough in the Japanese defences at Buna and Sanananda in December 1942--January 1943.
They played a vital role in the success of 2/9 Infantry Battalion, 2/10 Battalion and 2/12 Battalion. The success of the tanks and their devastating firepower saved many Australian infantry casualties - but sadly some of the 'tankies' forfeited their own lives.

The regiment was formed in August 1941, trained in northern New South Wales and, in September 1942, after participating in the largest armoured manoeuvres ever held in Australia, the first squadrons were sent to Papua.This history also includes a nominal roll, much technical detail and tells of a proud history of Australians at war.