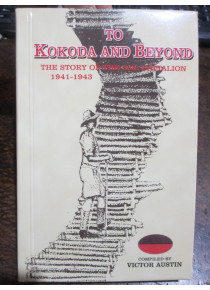 39th TO KOKODA AND BEYOND. The Story of the 39th Battalion

After the First World War the defence of the Australian mainland lay with the part time soldiers of the Citizens Military Force, also known as the Militia.

Concern over the entry of Japan into World War 2, made an attack onto mainland Australia a real possibility. Most of Australia’s crack soldiers; the AIF battalions were serving on the African frontline. Australia’s defence was paramount; recruiting was expedited with great urgency. The 39th Australian Infantry Battalion Militia, was formed with haste in 1941, from different Victorian militia elements and initially officered (except for platoon commanders) by World War One veterans, its ranks largely composed eighteen- and nineteen-year-old boys, armed with 1914-18 weapons.

Militia soldiers in WW2 were called the `Chocos', which was short for chocolate soldiers - from a joking belief that the soldiers would melt away when in front of the enemy. Officially during World War II, Australian law would not allow militia units to serve overseas. Men wishing to serve overseas would have to transfer to the AIF.

However, they were designated for a passive garrison role in Australian-administered Papua, the 39th was, literally, a ‘scratch’ unit. The 39th joined the 49th Infantry Battalion, already in Moresby, and the 53rd Infantry Battalion, which had been quickly formed in Sydney.

The 39th arrived in Moresby at the start of January 1942, with little military training.

The 39th was initially used for garrison duties and working parties.

However, this quickly changed as they became the only force between Australia and the Japanese onslaught. In June they were ordered to proceed up the Kokoda Trail to block any possible Japanese overland advance. The 39th B Company and troops from the Papuan Infantry Battalion (PIB) reached Kokoda on 15 July. Japanese forces landed at Gona, on the north coast of Papua, a week later and quickly moved inland.

Fighting ceased for almost two weeks. During this time the 39th was joined by the 53rd and the headquarters of the 30th Brigade. On 23 August the 2/14th and 2/16th Battalions from the 7th Division 21st Brigade also reached the area. The Japanese resumed their advance on 26 August. Despite hard fighting the Australians were forced back to Eora Creek on 30 August, Templeton's Crossing on 2 September, and Efogi three days later.

Exhausted, the 39th was relieved and sent down the track to Koitaki to rest. Between 3 and 18 December 1942 the Battalion lost eight officers and 220 men – killed and wounded.
The author Victor Austin served with the 39th Battalion and later with the 2/ 2nd Battalion AIF. While serving with the later unit, as a platoon sergeant under Lieutenant Albert Chown, Austin was badly wounded in March 1945, in the incident which won Chown his Victoria Cross and for which Austin was Mentioned in Dispatches.
Lest We Forget The Famous 39th Battalion the  “Chocos”
They were there to save Australia.

For those wanting to obtain a visual memorial to the 39th Battalion during the
Battle of KOKODA - many veteran interviews.
Click here to see the new documentary "Beyond Kokoda"