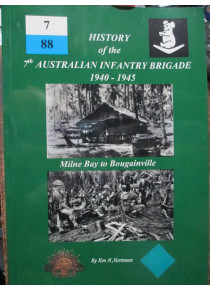 After World War One, the defence of the Australian mainland lay with the part-time soldiers of the Citizens Military Force (CMF), also known as the Militia.﻿﻿

Thus between the wars (period 1919 - 1939) there was only one 25th, 9th and 61st Battalions (the 61st only being raised in 1938)﻿. These battalions were delegated the responsibility of the defence of South East Queensland.﻿ Under the Defence Act (1903), neither the part-time Militia nor the full-time Permanent Military Force (PMF) could serve outside Australia or its territories unless they volunteered to do so.

So that our troops could be sent overseas, on the 15 September 1939 (WW2 declared on the 3 September 1939), Prime Minister Menzies announced the formation of the Second Australian Imperial Force (2/AIF). Essentially, there were then two 9th and 25th Battalions, the 2/AIF 9th and 25th﻿ Battalion and the 9th and 25th﻿ Battalion ﻿(Militia or CMF). This is the History of the 7th Australian Infantry Brigade﻿ (formed December 1941) which was made up of the 9th, 25th﻿ and 61st Battalions ﻿(Militia or CMF)﻿. ﻿
During 1940 and most of 1941 the men who joined the Citizen Military Forces (CMF or Militia) worked in their normal civilian jobs and did their Army training a few nights during the week, every second weekend and a few camps per year. It was part-time citizens military service. The CMF could not under Australian law fight overseas.﻿﻿

During this period a resentment developed between the AIF troops and the CMF. Disparaging names became to be used for the CMF such as the "Choco's" short for Chocolate Soldiers; meaning the CMF would melt under fire when things become too hot.

However, times changed in December 1941 (attack on Pearl Harbour / Malaya) and in﻿ 1942 Australia faced its greatest peril as Japanese forces advanced rapidly southward. The Philippines, Hong Kong, Malaya, Singapore and Indonesia had all fallen and the only land mass of significance between the Japanese and Australia was the island of Papua and New Guinea. If it fell, Australia, too, would eventually fall, effectively delivering the entire south-west Pacific into Japanese hands. With the Australian Imperial Force (AIF) fighting in North Africa or entering captivity in Singapore, the defence of New Guinea and indeed Australia, fell to a handful of Militia units.﻿

It was hastily agreed (not much choice) that due to Papua New Guinea being an Australian protectorate technically the CMF could be sent there to defend that country.﻿

The 7th Australian Infantry Brigade was relocated to Townsville to act in part of the city's covering force.  On 9 July 1942, the first units of the Brigade departed Townsville for Milne Bay (New Guinea), arriving there on 11 July 1942.  In August, the Brigade took part in the Battle of Milne Bay . At Milne Bay they fought together with 18th Brigade﻿ (2nd AIF which had returned from the Middle East), RAAF and a small US contingent to strike﻿ a considerable blow to the Japanese forces, inflicting upon them their first major defeat on land during the war.

After the Battle of Milne, the Brigade maintained a garrison around Milne Bay until March 1943 when they were moved back to Port Moresby and then Donadabu, to be held in reserve to reinforce troops around Wau.
In November 1943 it returned to Australia where it undertook a period of reorganisation and training on the Atherton Tablelands. In early 1944,  the Brigade was deployed overseas again, firstly to Madang where it undertook garrison duty before being transferred to Bougainville Island. They then took part in a number of significant battles until the end of the war including the Battles of Pearl Ridge and Slater's Knoll.﻿

The Author, Ron Mortensen has completed an impressive book which endeavors to record every known detail of the Brigade during WW2.

The book encapsulates a total of﻿ 521 pages.  The concise narrative history is supported by numerous photographs and detailed maps. There are a number of appendices, which includes sections on Citations and Awards, interrogation of L/Corporal Yamasaki, Poems of Milne Bay and more.
﻿

A members Nominal Roll with details complete this valuable History. ﻿