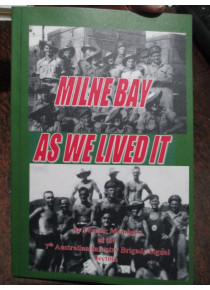 Battle of Milne Bay As We Lived﻿ It !

This book is a unit history of the Australian Seventh Brigade Signal Section during their tour of duty at Battle of Milne Bay during World War II. It was written by the former members of "J" Signal Sections. This book also includes﻿ the day-to-day signals before and after the Japanese invasion of Milne Bay.
It tells of the progress of the battle for the number 3 airstrip at Milne Bay during later part of 1942.﻿ The battle was actually the first defeat suffered by Japanese infantry for nearly 600 years. This battle also marked the turning point of the war in the Pacific and contributed to saving﻿ Australia from invasion.﻿

Told from the memory of men who were actually there and fought﻿ the Battle.﻿ 15 members provide their personal recollections﻿ of the Battle from their own perspective - a unique historical reference for researchers.﻿

The book has numerous photos most never before published of the members in action at Milne Bay.﻿

A nominal roll of the Signals Section is included.﻿