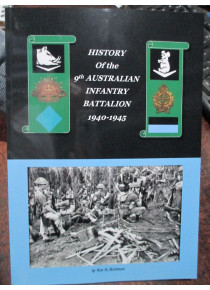 This is the History of the 9th Australian Infantry Battalion (Moreton Regiment Militia CMF not the AIF 9th ) during their service in World War Two, defending Australia from a threatening invasion from Japan.

This book covers their journey from training at Chermside, movement to Caloundra in January 1942 where they came under the Command of the 'Brisbane Covering Force Sector', entrainment to Townsville to defend Australia from a possible attack from Japan, shipment to Milne Bay in Papua New Guinea 9th July 1942 to defend the airstrips, Donadabu, their return to Australia for R & R, Madang, Siar and finally their movement to Bougainville in November 1944 to help rid the Island of Japanese.

At Milne Bay the main part of the Battalion were to defend the South side of the Bay from any invasion attempt by the Japanese, the Japanese invaded the North shore and the Battalion's 'C' Company moved forward to the Number 3 Airstrip to support the 25th and 61st Battalions defensive line, where the Japanese suffered their first defeat on land in the south-west pacific.

In Bougainville the 9th Battalion went into action first, fighting along the Numa Numa Trail at Little George Hill and Artillery Ridge. Later the Battalion moved into the Southern Sector of Bougainville with the rest of the 7th Brigade and fought their way inland to take the track junction at Mosigetta. Their 'B' Echelon fought against overwhelming odds to defend their position at Barara.

After the Japanese surrendered in August 1945 the Battalion returned to Australia on the 9th November 1945 and was finally disbanded on the 26th November 1945.

The author has diligently expanded the history of the Ninth Battalion during WW2 with much additional information. Utilising the use of maps, personal memoirs, photographs he has delivered the most comprehensive memorial to the heroes of the 9th Battalion Militia during WW2.﻿