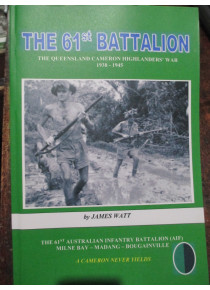 The 61st Australian Infantry Battalion (Queensland Cameron Highlanders) was sent to Milne Bay in mid-1942 and within weeks found itself in the front line against the Japanese invaders.

This inexperienced militia battalion soon learned on the job, as they slowed and stopped the first attacks along the swampy coastline of the bay. They played a key part in the defeat of the Japanese and later in the war, were in action again. This time they were on the island of Bougainville where a slow grinding war of attrition was fought out in the dark and steamy jungle.

This complete unit history adds to the military history of Australia and shows how an earlier generation rose to the challenge when their country was threatened.

James Watt waited more than 50 years for his battalion history to be written and in the end took on the job himself. Joining the Battalion at 19 years of age, he soon found himself in New Guinea with a Japanese attack expected at any time. He was in Milne Bay throughout the Battle, was given a job in the Intelligence Section and when the unit was sent home, he was selected for officer training. After promotion he was sent to Canungra Jungle Warfare School and then became acting Intelligence Officer with the 14/32 Battalion. He ended his war on New Britain as the acting Brigade Intelligence Officer.

A detail narrative is supported with numerous photos, maps, Honours and Awards appendix, Nominal Roll of the Battalion from July 1941