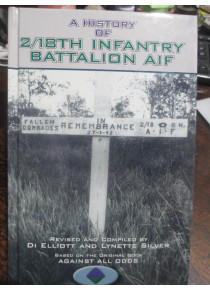 18th History of 2nd 18 Battalion based on Against All Odds

The 2nd 18th Battalion was part of the ill-fated Australian 8th Division that was sent to Malaya to support the British forces. The Japanese invaded the Thai Malaya Peninsular on the 8 December 1941 (50 minutes before Pearl Harbour attack). For opposing British Allied Forces including Australia  this was the start of a long retreat down the Peninsular.

The British were pushed back and inevitably the Australians faced the enemy. 2/ 18th Battalion was based on the Malaya east coast and it was at Nithsdale Plantation where they fought their first major action against the Japanese. When Singapore Island was invaded, this Battalion was in the front line of the attack. Massive enemy numbers and the lack of prepared positions, meant that withdrawal was inevitable.

With the Fall of Singapore, the survivors of the battles become POW where more than 200 of them died in captivity.

This History has an impressive appendix of soldier rolls including Full Nominal Roll, POW Camp Rolls , Killed In Action Roll and Died while POW Roll.

This revised edition is based on the original book AGAINST ALL ODDS.