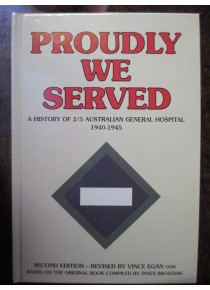 This is the revised unit military war history book of 2/5 Australian General Hospital from its formation in Greta, NSW, in April and May 1940 until the close of the hospital during service in the South-west Pacific Area after the cessation of hostilities and the surrender of the Japanese forces in October 1945.

Its first task during the war was to send a detachment to Darwin but it was in the Middle East that they came to together as a full unit.

Sent to Greece they were caught by the rapid German advance and although the female nurses and others escaped to Crete and Egypt, many staff volunteered to stay behind, care for the wounded and allow themselves to become POWs. It was at that time that their CO was killed in a bombing.

The reformed unit gathered together in Palestine before a move to Eritrea where wounded were sent to them, to be out of the immediate battle area.
With the start of the Pacific War they were needed at home and they eventually formed a hospital near Port Moresby, building a tent camp on open ground.

Finally, at war’s end they were at Morotai – the launching platform for operations in the Philippines and Borneo.

The POWs continued their work with little hindrance in the early period of captivity but then followed the years behind the wire. Their story is told in detail.

This hospital unit contributed greatly to the saving of lives and it can be confidently said, that they did their duty to the fullest and lived up to their motto PROUDLY WE SERVED.