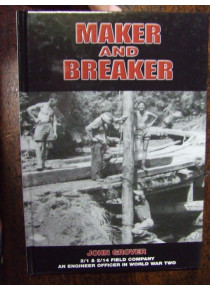 The author joined up in the Engineers when war broke out in 1939. By October 1941, whilst in the Middle East he was promoted to Lieutenant﻿. He was in the field with 2/1 Field Company which had pushed north into Syria fighting the Vichy French.

Like most of the 2 AIF, the Engineers were recalled to Australia and Grover soon found himself in New Guinea. The unit was sent to the start of the Kokoda Trail, with the task of hacking a new track through the jungle. They had almost reached Nauro when the Japanese arrived first and the work was abandoned.

They later built roads and bridges around Buna. It was difficult country to traverse with monsoon rain and  floods washing away much of the good work.

Later the author took charge of a platoon of 2/14 Field Company, working around Wau and Bulolo –– again building and repairing vital bridges.

The end of the war in the Pacific found Grover and his engineers supporting the fighting along the New Guinea north coast.