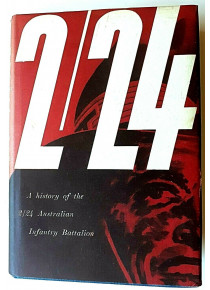 "The Second 24th was one of the best battalions to leave Australia. This is indicated by its high tally of decorations but also the fact that it suffered more battle casualties than any other Second AIF Battalion.
Some 335 killed in action or died of wounds. More than 30 others died of illness or accident, and nearly 900 were wounded.

The names of its dead will live for evermore. So will the names of more than 3000 members who survived the war, many of whom have since passed away. In 1940, Churchill predicted that if the people of the Commonwealth stood fast, then for 1000 years people would say, 'This was their finest hour': no one can deny that 1940-1945 was the finest hour of the volunteers who joined the 2/24th Battalion." Dr Mark Johnson spoken at the Melbourne Shrine in 2006.

A unit of the all-volunteer Second Australian Imperial Force (2nd AIF), it was formed in July 1940 from primarily Victorian volunteers and was known as "Wangaratta's Own" because of the time the battalion spent in the town during its formative period prior to deployment overseas. It served in North Africa in 1941–1942 as part of the 26th Brigade, which was assigned to the 7th Division, before being reassigned to the 9th Division.

In early 1943, the Battalion returned to Australia and later took part in campaigns against the Japanese in New Guinea in 1943–1944 and Borneo in 1945, before being disbanded in 1946.