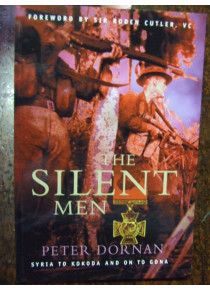 The Silent Men Syria to Kokoda and on to Gona by P. Dornan

This Battalion history book is the story of the 2nd AIF 14th Bn Battalion during the WW2.

Who are 'the silent men'? Peter Dornan tells of the incredible heroism of Bruce Kingsbury, Alan Avery, Harry Saunders, Teddy Bear, the Professor and others who make up the eleven-man section that became one of the most decorated in British and Australian military history.
This is their story, and the story of the Australian 2/14th Battalion in World War II, told through the eyes of Stan Bisset, international rugby player. These men fought a bitter and costly war against the Vichy French in Syria and were recalled to defend Australia against the Japanese in Papua New Guinea. At Isurava on the Kokoda Track they were part of the Australian force that held up the all-conquering Japanese in some of the most critical and vicious battles of the war. Their story finishes on the bloody beaches of Gona with Stan Bisset being one of the few men to walk out.
Among the battalion's record swag of decorations, Bruce Kingsbury was posthumously awarded the Victoria Cross - the only one given during the gruelling six-month campaign, the first awarded in the Pacific area, and the first gained in territory administered by the Australian Commonwealth.