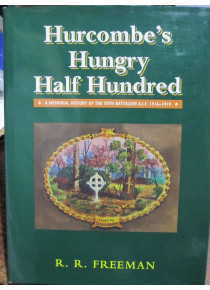 This military 1st World War book chronicles the Battalion History of the Australian 50th Battalion AIF. The 50th Battalion was formed in Egypt in early 1916, when the Fighting 10th Battalion was split following the Gallipoli Anzac campaign.
The 50th Battalion which was largely comprised of men from the State of South Australia had distinguished service with the AIF 4th Division commanded by Monash.
The Battalion participated in some of the largest battles fought by the AIF, including Pozieres Bullecourt Passchendaele and Villes Bretonneux.
The 50th Battalion importantly fought at the Battle of Dernancourt where Australian forces were outnumbered by Germans.
The author has drawn on vast amount of veteran/family information to document the 50th Bn in such high detail. A large high quality book with numerous personal information about individual soldiers. Has a large section devoted to post war pics of diggers - Anzac day, Association and reunion attendances. This impressive work ends with an Honour roll, Full Awards Roll with commendations and a nominal roll.

After the publication of the book the author, Roger Freeman become aware of a large collection of around 3000 photographs located in the State Archives. About 150 of these were found to be of 50th Battalion members. Roger Freeman ( a devoted friend of the 50th ) made a supplement which was produced in 1993. Interestingly, included in the supplement is the photo of Stanley Zygas who is the last man named on the Nominal Roll of the 1st AIF.

The supplement was not widely distributed and is now rarer than the actual book - check the photos and product details report of the book to ascertain if the Supplement is included in this sale.

Brief History of the 50th

The 50th Battalion was raised in Egypt on 26 February 1916 as part of the “doubling” of the AIF. Approximately half of its recruits were veterans from the 10th Battalion, and the other half, fresh reinforcements from Australia. Reflecting the composition of the 10th, the 50th was predominantly composed of men from South Australia. The battalion became part of the 13th Brigade of the 4th Australian Division and was dubbed “Hurcombe’s Hungry Half Hundred”, after its first CO, Lieutenant Colonel Frederick Hurcombe.

After arriving in France on 11 June 1916, the 50th fought in its first major battle at Mouquet Farm between 13 and 15 August and suffered heavily. It took part in another assault launched there on 3 September. The battalion saw out the rest of the year alternating between front-line duty, and training and labouring behind the line. This routine continued through the bleak winter of 1916-17.

Early in 1917, the battalion participated in the advance that followed the German retreat to the Hindenburg Line, and attacked at Noreuil on 2 April. For his actions at Noreuil Private Joergen Jensen was awarded the Victoria Cross. Later that year, the focus of AIF operations moved to the Ypres sector in Belgium. There the battalion was involved in the battle of Messines between 7 and 12 June and the battle of Polygon Wood on 26 September. Another winter of trench routine followed.

Utilising troops freed by the collapse of Russia in October 1917, the German Army launched a major offensive on the Western Front at the end of March 1918. The 4th Division was deployed to defend positions south of the River Ancre in France. At Dernancourt, on 5 April, the 50th Battalion assisted in the repulse of the largest German attack mounted against Australian troops during the war. The German threat persisted through April, and on ANZAC Day 1918 the 50th participated in the now- legendary attack to dislodge the enemy from Villers-Bretonneux.

The 50th Battalion continued to play an active role during the Allies’ own offensive, launched on 8 August 1918. Its last major operation of the war was the attack on the Hindenburg “outpost line” on 18 September, during which the 50th composed part of the 4th Division’s reserve. The 50th Battalion ceased to exist as a separate entity when it amalgamated with the 51st Battalion on 6 March 1919.