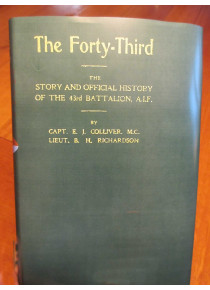 The Forty-Third
The Story and Official History of the 43rd Battalion AIF
by Capt. E.J. Colliver MC & Lieut. B H Richardson

The Forty-Third: The Story and Official History of the 43rd Battalion

Captain Colliver (Battalion Adjutant) and Lieut. Richardson (Battalion Intelligence Officer) began writing the original book at the end of the war in 1918. They completed the 22 chapters, appendixs, maps by the end of 1919. The book was then published and offered to the men and families throughout 1920. The original was offered as an limited edition. These days it remains one of the rarer WW1 Battalion histories - over $1000 market value realised .

Each of the Battalion's battles and other major activities are well documented with details of the operations and naming of individuals prominent during the battle - including acts of valour.﻿ This book has
many detailed maps - which have been redrawn in this edition.

This book is a facsimile digitised﻿ reproduction of the original book. Compared to most facsimile books you will find the print on this book to be crisp, black and clear. Also the book has many additional photographs and further narrative.﻿﻿

﻿Mostly a South Australian battalion.  Along with the 41st, 42nd, and 44th Battalions, plus support troops, it formed the 11th Brigade.

The battalion embarked in June 1916 and, after landing briefly in Egypt, went on to England for further training. The battalion arrived on the Western Front in late December 1916. The 43rd Battalion spent 1917 bogged down in bloody trench warfare in Belgium Flanders. In June the battalion took part in the battle of Messines and in October the Third Battle of Ypres.

The battalion spent much of 1918 fighting against the German spring offensive, they helped stop the Germans at Villers-Bretonneux. In July, the 43rd, was one of the lead battalions selected by General Monash for the attack on Hamel. In the following months, they continued in driving the Germans back to the Hindenburg Line.

The 43rd joined the advance that followed the 2nd Division's victory at Mont St Quentin and it was during this operation that Temporary Corporal Lawrence Weathers earned the battalion's only Victoria Cross. Weathers was mortally wounded in the battalion's next battle. The battalion commander, Lieutenant Colonel John Farrell wrote "..he died at the Regimental Aid Post, and lies buried on the battlefield. The same shell killed his uncle, who bore the name of Lance-Corporal J.J. Weathers."

The book has been professionally made with sewn and glued binding (not hot melt), headbands top and bottom. The hard covers have been finshed in real green buckram﻿ - insect and water resistance to modern standards. Titles are adorned in gold foil. Complete with outer dust jacket in the style of the 1st edition. Superior coated 100 gsm paper (anti ageing) used throughout.﻿ ﻿