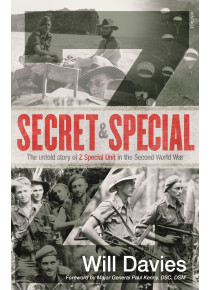 The untold story of Z Special Unit and Operations, the precursor to the elite SAS, and the extraordinary feats they undertook in the Pacific during the Second World War. ﻿
In 1943 it became known under the cover name Special Reconnaissance Department (SRD) and included some British officers who had escaped from Singapore. After arriving in Australia, they assembled in Melbourne, forming the nucleus of ISD and together with some Australians established what became the Z Special Unit.

Training began in a number of locations around Australia including on Fraser Island off the Queensland coast, In Broken Bay near Sydney, at Careening Bay in Western Australia, at the “House on the Hill” in Cairns and at East Arm near Darwin. From these training areas and bases, Z Special undertook intelligence gathering and raiding missions throughout Southeast Asia including New Guinea, Singapore, Timor, Malaya, Borneo, Vietnam and the Dutch East Indies.

The first operation was Jaywick in September 1943. Led by a 28 year old officer from the Gordon Highlanders, Captain Ivan Lyon. Using an old Japanese fishing boat renamed Krait this captured vessel was re-fitted and provisioned for a voyage from Australia to just south of Singapore where it released six commandos in three folding kayaks to attack Japanese shipping in the harbour. They placed limpet mines on several Japanese ships sinking 40,000 tons of shipping. After the successful attack, they paddled south, were picked up by the Krait and successfully returned to Australia.

This was followed by Operation Rimau again led by Lyon but this time things went very wrong very early. Identified, they made a fighting withdrawal but all of the raiding party were shot or captured, with the last ten being executed just before the end of the war.
Important in Z Special operations were a number of vessels designated “snake boats”. Four 66’ modified trawlers were constructed as well as a range of Asian vessels that allowed their operation in South East Asian areas of operation.

One Z Special, the last in PNG, set out on the night of the 11 April 1945. Eight operatives were landed on the Japanese held island of Muschu about five kilometres off the coast near Wewak to determine the status of two 140mm Japanese naval guns that had been placed there. These guns would prove dangerous to planned naval landings at Wewak, and allied command needed to know if these were operational. ﻿