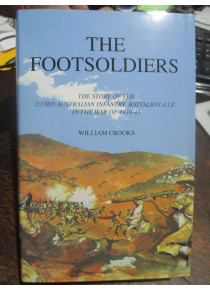 The Footsoldiers The Story of the 2/33rd Australian Infantry Battalion

A large 2/33rd Battalion History book of 586 pages. The second edition (revised) has additional pages to the first edition, including much more post war Veteran information.

The Battalion was formed in the United Kingdom in mid 1940 from recently arrived unallocated Australian soldiers. The Battalion saw action in Syria and Lebanon. Not long after then being withdrawn back to Australia.

Deployed to Port Moresby almost immediately they fought the Japanese on the Kokoda Track. In 1943 the Battalion, was at Jackson’s Airfield at Moresby waiting to be flown to Nadzab. Tragedy struck when a Liberator bomber crashed into the Battalion men. Killing 60 men and 92 being wounded. They subsequently took part in the advance from Nadzab to Lae and later action in the Ramu Valley and the Finisterre Range. The Battalion landed at Balikpapan in Borneo in 1945 thus seeing its last action of the war.

A fine high quality made book - get it now because once stock is sold guess the price !