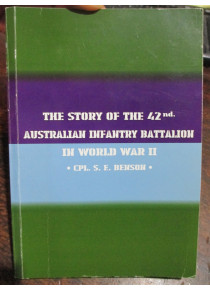 Story Of The 42nd Australian Infantry Battalion In WW2 Book

In early 1942, the Battalion was located in North Queensland and was tasked making ready defensive positions around Townsville in case of a Japanese invasion.

There after conducted jungle warfare training at Mount Spec, near Townsville. Lieutenant Colonel Charles Davidson took over as commanding officer in September 1942. In January 1943, the Battalion was deployed to Milne Bay in New Guinea to take part in operations against the Japanese. The battalion subsequently moved to Buna and Boisi in mid-July, before moving again to Morobe. In August, the 42nd Battalion moved to Nassau Bay, then redeployed to Tambu Bay, fighting during the Salamaua–Lae campaign around Mount Tambu. On 9 September, it secured Charlie Hill, subsequently allowing the capture of Salamaua three days later. In early 1944, the 29th Brigade was involved in clearing the Japanese from Lae alongside the 7th Division. In August, the battalion returned to Australia after 18 months on operations, encamping at Young's Crossing in Petrie, Queensland, for reorganisation after a period of leave. Lieutenant Colonel Joseph Byrne took over as commanding officer in September 1944.

The battalion was subsequently redeployed to Bougainville in December 1944, with the 29th Brigade becoming part of the 3rd Division. Initially deployed in the Southern Sector, the 29th Brigade commenced operations with the 15th Battalion conducting the initial advance down the coast from the Jaba River to the Tavera. The remainder of the brigade, including the 42nd Battalion, commenced operations in January 1945. Entering the abandoned village of Mawaraka on 17 January, the battalion occupied it and then began patrolling forward, frequently clashing with Japanese forces amid the swamps in the area. The 29th Brigade was subsequently relieved by the 7th Brigade and returned to Torokina. In July the 29th Brigade relieved the 15th Brigade along the Mivo River, with the 42nd Battalion taking up positions along the Buin Road, between the Mobiai River and Nana Creek. Meeting strong resistance the brigade advance was held up; however, the Japanese were subsequently cleared and the Silibai River captured on 10 July. The 42nd Battalion subsequently established patrol bases on the Mivo, reaching the Oamai River by the end of July. Hostilities came to an end in August following the Japanese surrender and the demobilisation process began.