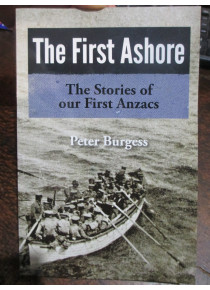 $33.00
The First Ashore Stories of Our First Anzacs by P Burgess

Anzac Day, 25th April 1915, is there a more significant date in Australia's history?

It's a date known to all Australians but most know little or nothing of the men who went aboard the row boats that morning making the history that we all celebrate today.

Since the landing there has been a question or mystery as to who was the first ashore at Gallipoli. Australia's foremost military historian Charles Bean was there on that day. Not long after landing he was asking that very question amongst the men.  Charles Bean wrote in 'The Official History of Australia in the War of 1914 1918 Volume 1 The Story of Anzac', that the first man ashore was Lieutenant Duncan Chapman and other men of the 9th Battalion AIF.

Over the years, more evidence has been collected and from his own extensive research, Peter Burgess, the author of this book, accurately names the men who made up the first boat ashore at Gallipoli. Importantly, he traces their life story, of what happened to them during the war and what become of them after the war.

The book is an important addition to the history of Anzac Day and would be of high interest to family history genealogy researchers, medal collectors and most Australians with a military interest.


'As somebody who has a particular interest in the history of The First Ashore at Gallipoli, this book is the most definitive work that I have had the pleasure of reading. Peter's research has filled a lot of the gaps and he is to be commended for his efforts'