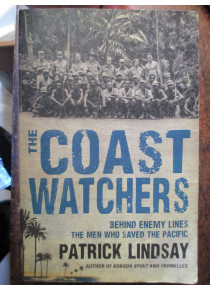 The Coast Watchers Behind Enemy Lines The Men who saved the Pacific by P.Lindsay -

This war book records the operations of the Coast Watchers WW2.

Mostly Australian, with some British, New Zealand and American members, the Coast Watchers hid in the jungle on the islands, constantly moving to evade enemy patrols, all the while reporting via cumbersome tele-radios that took a dozen men to transport.

What made their valour even more laudable was that they did so at a time when there was no certainty that the Allies would be able to prevail against the seemingly unstoppable invaders. The Coast Watchers risked their lives when the Japanese had total control of the region and discovery meant certain death. The Coast Watchers reported on Japanese troop movements, warned of attacks by sea and air and saved countless civilians, downed airmen, lost soldiers and shipwrecked sailors – including the future US President John F. Kennedy.

As the tide of the war turned in the Allies’ favour, many Coast Watchers took an offensive role, leading guerrilla bands that greatly hampered the Japanese retreat. These unheralded heroes performed extraordinary feats. Two of their most remarkable members, Paul Mason and Jack Read, worked on Bougainville under the most harrowing circumstances: with constant enemy patrols trying to eliminate them, with few supplies and uncertain support. Their warnings played a critical role in allowing the Americans to triumph on Guadalcanal. Malcolm Wright and Peter Figgis worked from New Britain, Martin Clemens on Guadalcanal, Donald Kennedy (who led his own private army) on New Georgia Island, Reg Evans (who rescued JFK) on Kolombangara Island, Father Emery de Klerk, the warrior-priest, protected his flock by leading a guerilla band against the Japanese on Guadalcanal, the heroic islander, Simogun Pita, personally killed 31 Japanese soldiers while working with the Coast Watchers on New Britain