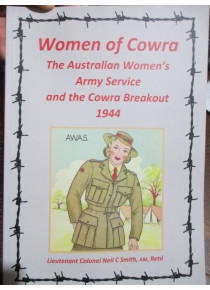 $27.00
Women of Cowra The Australian Women's Army Service and the Cowra Breakout 1944 By Lt Colonel N C Smith AM Retd

A record of the Cowra Breakout from the perspective of members of the Australian Women's Army Service stationed in Cowra at the time of the Breakout.

Early on the 5th August 1944 over 1000 Japanese POW stormed the fence of Cowra POW Camp in New South Wales. It was the largest prison breakout of WW2.

Hundreds of Japanese and a few Australians died. There was quite a large contingent of AWAS women in Cowra. No doubt this account adds valuable research to what happened. The book concludes with a nominal roll of the women with biographical details.