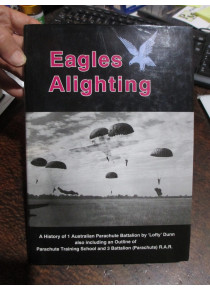 This is a history of the Australian Paratroopers formed in 1942 and becoming 1 Australian Parachute Battalion with a Parachute Training Unit and Mountain Battery Parachute Artillery.  The first Australian Army personnel to complete an operational jump were members of 54 Battery, 2/4th Field Regiment, on 5 September 1943. These artillerymen, with negligible parachute training, jumped with their guns to support US parachute infantry during the Landing at Nadzab New Guinea. Members of Z Special Unit were also trained in parachuting for covert operations against the Japanese. The PTU also developed techniques for the aerial delivery of stores. Trained Z Special Unit teams that were parachuted into the interior of Borneo during 1945 - as part of the preparations for the Australian led Borneo Campaign. The book also includes an outline study, of the 3 Battalion (Parachute) Royal Australian Regiment and the parachute Training School which continued the tradition. Out of the scope of the book (printed 1999), in 2011, 3 RAR relinquished the parachute role with the Army deciding to opt out of a conventional parachute capability in preference to a special forces large-scale parachute capability.