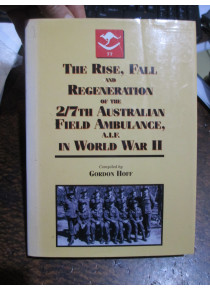 $59.00
The Rise, Fall and Regeneration of the 2/7th Australian Field Ambulance AIF in World War II by G Hoff

The history of the 7th Australian Field Ambulance during World War II from 1939 to 1945.

Unit was formed at Northam in June 1940 and after basic training left for the Middle East in September. When they arrived at Beit Jirja in October they found that they had been transferred to the 19th Infantry Brigade, a part of the 6th Australian Infantry Division. In November, they moved to Burg el Arab, and when the Division moved into the Western Desert, 'A' Company 2/7th Australian Field Ambulance were in support at the assault on Baria in January 1941. The whole unit participated in the assault on Tobruk before moving to Barce where they operated a hospital. In March 1941 they returned to Egypt to prepare for the move to Greece, where they arrived in early April.

In Greece they were in support of the 19th Australian Infantry Brigade Group. They were forced back by the Germans to Megara by the end of April, with most being evacuated from the beaches and landed on Crete. Here they established their Main Dressing Station at Vrysses, with Advanced Dressing Stations at Retimo and Georgioupolis. 'B' Company at Retimo was cut off and surrendered, part of the unit were evacuated to Egypt from the beaches at Sfakia in late May.

Returning to Australia, in New Guinea, they were a part of the force sent to Aitape in November 1944 with orders to push south and capture Wewak. In December 1944 the 2/7th Australian Field Ambulance moved to Babiang; in January 1945 to Ulau; February to Suain, and in March to Matapau in March. Here they were relieved by the 2/1st Australian Field Ambulance. In April they operated a malaria hospital at But, and after the capture of Wewak they moved to Cape Wom in May 1945 where they remained for the rest of the war.