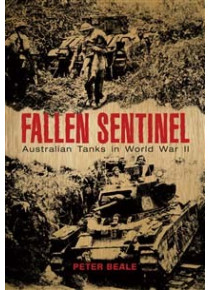 This war book Fallen Sentinel tells the story of Australian tanks in World War II, a dismal tale for both tankman and taxpayer. Against the backdrop of the sweeping conquest of Western Europe by Hitler's Panzers, the Australian Government, cash-strapped and resource poor, attempted to field its own tank force to do battle with the Axis forces.
Three armoured divisions were created — and all three disbanded before they had seen action. In what became a prodigious waste of time, material, and human endeavour, sixty-six Australian cruiser tanks were produced — the Sentinel tank —none of which would ever take the field of battle.

This is a book that portrays governments under pressure and the bureaucratic bungles that saw opportunities lost and precious resources squandered. Fallen Sentinel presents a careful dissection of government process in the crucible of war, a rare gem in an age when most wartime histories focus on the front-line soldier. Peter Beale presents a damning indictment of the frailty of government under pressure, a bureaucracy in crisis and the extraordinary failure of government process at the highest level. Modern-day governments would do well to heed the lessons of this book.