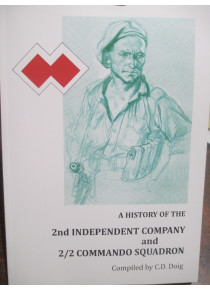 A History of the 2nd Independent Company and 2/2 Commando Squadron : compiled by Col Doig

2/2nd Commando Squadron, the Double Red Diamonds, was one of 12 independent companies or commando squadrons raised by the Australian Army for service during WW2.

In 1941, they formed part of Sparrow Force, along with the 2/40th Battalion, RAAF aircraft support and a small force of artillery. Sparrow Force was an Australian initiative to try and defend the island of Timor and in turn delay Japan's relentless march towards Australia.

The Japanese invaded Timor on 20 February 1942, the primary aim of delay and defending was successful but the opposing forces were overwhelming and the main part of Sparrow Force surrendered.

However, the commandos of the 2nd Independent Company retreated into the mountains, from where they would wage a guerrilla campaign against the Japanese for over a year. They inflicted casualties far in excess of their number, and showed the usefulness of guerrilla forces against a numerically superior enemy.

An interesting story of Australian military skill, a member was able to make a radio transmitter and communicate with Darwin. Many members of the unit were rescued and the unit was reinforced and re-equipped  in Australia going on to fight in the Pacific theatre - New Guinea and New Britain campaigns.