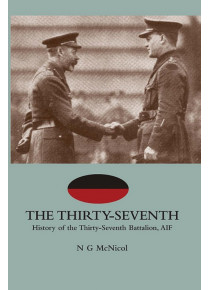 This is the Official Battalion Military History book compiled and written with
the assistance of the 37th Battalion Association, Bn members,
and numerous written documents/war diaries/information.
The book was first published in 1936.
The book being offered is a professionally produced reprint of that history. It is a true reproduction of the 1936 1st edition. Even these reprints escalate in value when they in turn, become out of print. Here is your chance to obtain this book that can be treasured
as a hand me down Family History Book.
Follows the 37th Battalion 1st AIF history from its formation in Seymour Victoria.
The Battalion landed in France during November 1916. Notable battles, that the Bn fought were at Messines Polygon Wood Broodseinde Passchendaele Amiens, Somme and on the Hindenburg Line.

At the end of the war the 37th had a fighting strength of only 90 men ! Roll of Honour, Honours and Awards, and unit nominal roll of all members complete this history.

Abbreviated History 37th Battalion
The 37th Battalion was formed, as part of the 10th Brigade of the 3rd Australian
Division, in February 1916 at Seymour in Victoria. Its recruits were drawn from
Melbourne, north-east Victoria and Gippsland. After training in both Australia
and Britain, the battalion moved to France on 23 November 1916. Within a week
it had begun to occupy trenches on the Western Front, just in time for the onset
of the terrible winter of 1916-17. During this time the 3rd Division was heavily
involved in raiding the German trenches. In February 1917 the 37th Battalion
provided 400 troops, with a similar party from the 38th Battalion, to form a
special raiding “battalion”. After several weeks of training this force staged
a single 35-minute raid on the night of 27 February and was then disbanded.

The 37th fought in its first major battle at Messines, in Belgium, between
7-9 June 1917. For his actions during this battle, Captain Robert Grieve was awarded
the Victoria Cross. The battalion fought in another two major attacks in this
sector - the battle of Broodseinde on 4 October, and the battle of Passchendaele
on 12 October. Belgium remained the focus of the 37th Battalion’s activities
for the next five months, until it was rushed south to France in late March
1918 to meet the German Army’s Spring Offensive. The Allies launched their own
offensive on 8 August 1918, but the 37th Battalion was in reserve on this day
and was not ordered into action. It was involved, however, in an ill-conceived
attack that failed to capture the village of Proyart on 10 August. The battalion
nevertheless continued to play an active role throughout August and early September in the 3rd Division’s advance along the Somme Valley. Despite its success, this   advance sapped the strength of the AIF.

In September 1918 several battalions were ordered to disband to provide reinforcements for others. The 37th was one  such battalion. Its CO, Lieutenant Colonel Charles Story, was dismissed for questioning the order in letters written to all of his superior commanders,  including the Prime Minister. The men of the battalion subsequently mutinied.  On 23 September the order to disband was temporarily suspended, and the battalion   fought its last battle - St Quentin Canal - six days later. On 12 October 1918  the 37th Battalion, then with a fighting strength of 90, disbanded.
LEST WE FORGET
Battalion Honours
* Messines 1917 * Ypres 1917 * Polygon Wood * Broodseinde * Poelcappelle * Passchendaele  * Somme 1918 * Ancre 1918 * Amiens * Albert 1918 * Mont St Quentin * Hindenburg Line * Hindenburg Line * St Quentin Canal * St Quentin Canal * France and Flanders  1916-1918