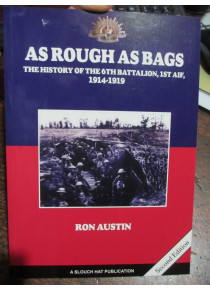 As Rough as Bags: The History of the 6th Battalion

The 6th Battalion was recruited solely from Victoria, with Melbourne and towns to the inner north being well represented. Recruitment was completed within 2 weeks of the  commencement of WWI in August 1914. The 6th Battalion sailed with the 1st Division less than 2 months later.
The 6th Battalion landed at Gallipoli as part of the 2nd wave on the 25th April 1915. Later they transferred to Cape Helles to take part in the charge on Krithia ( click here if you would like to see the Ron Austin’s book White Gurkhas written on this attack). Although the boys made a brave advance the ground was flat without feature which offered no protection. Sergeant Neville Rollason of the 6th Bne wrote of the attack, “We attacked the enemy, advancing under a terrible fire from rifles, machine guns and shrapnel for a distance of 800 yards. When I say ‘we’ I mean the others for I only got 600 yards when I got in the way of a machine gun.” The Battalion suffered heavy casualties within an hour 133 members lay dead.

They returned to Anzac, during the August Offensives, the 6th Battalion made an attack on the German Officers trench opposite Steele’s Post. Although a daring attack from tunnels in no man’s land the advance failed. It was estimated that 63 men actually made it into the enemy's German Trench as their bodies were never recovered. The attack was reminiscent of The Nek Light Horse Charge. As the Officers of the Battalion wished to call off the attack but were urged by superiors to once again attack.

A 6th Battlion hero of the 2nd attack was Captain Alf Jackson his CO recommended Jackson for a posthumous bravery award which was never awarded the citation read,”He worked well in a dark underground tunnel organizing and when the advance commenced by his fearless bravery helped the men forward under heavy fire. Even after he was hit,he continued his work until his leg was very badly smashed"


The 6th Battalion was typical of the Australian infantry battalions, and it could be argued that it was one of the best. The 6th Battalion's maturity as a fighting battalion, was sometimes described as being 'as rough as bags'.

The History of the 6th Battalion is vividly described as the author Mr Ron Austin, research included extensive use of diaries, letters, interviews with veterans, and member photographs, many of which have never been published before. The inclusion of many appendices makes this history a notable addition to Australian military Book Histories.