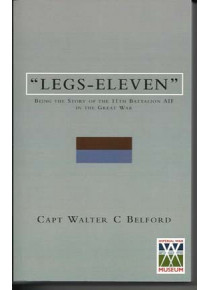 “LEGS-ELEVEN Being the Story of the 11th Battalion AIF in the Great War ' by Capt Walter C Belford. Before the war, Belford was a teacher, with a Master of Arts Degree from Edinburgh University. He had previous military training with the University Rifles. He traveled to Western Australia in 1912. 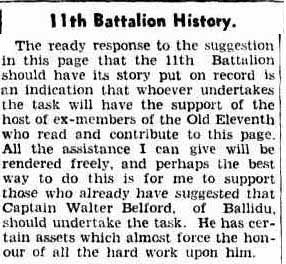 Thus, when he joined the 11th Battalion on the 4/10/1915 he was commissioned as a 2nd Lieutenant. He was twice Mentioned in Despatches for Gallantry in the Field and was wounded on 22/7/16 at Pozieres but remained on duty. He recovered to survive the war.In 1936, he was selected to write the 11thBattalion History Book to be titled ‘ LEGS ELEVEN ’. He died in 1983.
This is the Official Battalion History which was compiled and written with the assistance of the 11th Battalion Association, numerous battalion members, and many written documents/diary/information. Written by one who was there in the trenches. The book was first published in 1940.This book is a professionally produced reprint of that 1st edition history. Follows the 11th Battalion 1st AIF history from its formation in Western Australia. The training of the Battalion in Perth and Egypt (also Defense of Egypt). Comprehensive details regarding the planning and the First day landing of Battalion on ANZAC Gallipoli. The 11th was part of the covering force for the 25th April Landing on Gallipoli and formed the left flank of that force. The book documents the many Battles on Gallipoli and later on the Western Front (see below).
By end of the war, 11th Battalion suffered casualties of 1,115 killed and 2,249 wounded. The 11th Battalion was disbanded in 1919.

The Book is a large history, at 667 pages I believe that this is the largest volume ever written on any one of the Australian AIF Battalions - a very detailed text supported with maps, diagrams, b&w pic Illustrations.