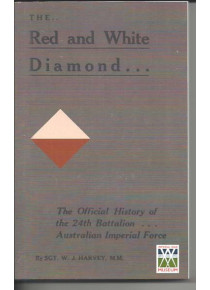 RED AND WHITE DIAMOND Authorised History of the Twenty-fourth Battalion AIF' by Sgt. W J Harvey MM. Before the war, Sgt Harvey was a journalist, a profession which no doubt enabled him to write such precise and clear text for this history. Harvey joined the AIF on the 15/4/1915. He did not embark with the Battalion until the 5th reinforcements being allotted the regimental number 2465. He was with the battalion at Pozieries where he was awarded the Military Medal for bravery in the field.

This is the Official Battalion History compiled and written with the authorisation of the 24th Battalion Association, assistance from numerous battalion members, and many written documents/diary/information. The book was first published in 1924 with a limit of 200 books. The book being offered is a professionally produced reprint of that history. It is a true reproduction of the 1924 1st edition. Of course the value of an original copy of this history is close to 700 dollars. Even these reprints escalate in value when they become out of print. Here is your chance to obtain this book that can be treasured as a hand me down Family History Book. The 24th was formed in the first week of May 1915. Initially, the Battalion was to be formed with soldiers from the "outer states". However, the Gallipoli Landing news had set the country alight with patriotic fervor. A vast amount of recruits were enlisting in Victoria and it was decided that it would be made a Victorian Battalion. Details of the 24th history right from formation onwards to Gallipoli where the Battalion was conspicuous in the Defense of Lone Pine. Follows the many Battles on the Western Front (see below). Roll of Honour (with dates) and
Honours and Awards (including MID), complete this history. Detailed text of
324 pages with maps, diagrams, b&w pic Illustrations.