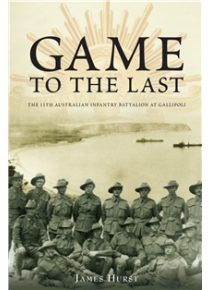 Game to the Last - 11th Australian Infantry Battalion At Gallipoli by J. Hurst 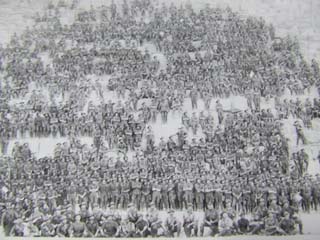 Game To The Last
The Author James Hurst began this book with a search for one man, a friend of his grandmother, who went to war and didn’t return. All Hurst knew about him was his name and what he looked like from an old 75-year-old war photograph. The zeal to discover this man lead finally to this military book, Game To The Last.
During his journey, Hurst gathered an extraordinary amount of details of over a 1000 men and boys who enlisted in the 11th Bne. For anyone searching for Family History information the narrative of Game to the Last is loaded with piles of personal names and their long lost stories.

The 11th Battalion was part of the AIF covering force during the 25th April 1915 landing on Gallipoli. A and C Companies were to be first ashore. They landed in Anzac Cove and the 11th Battalion Members after overcoming deep water stormed Plugge's Plateau. A Battalion Officer Captain Peck led forward with a cry of , 'Come On Boys...by God I'm frightened!".
Forgotten in time, but on the 4th May 1915, men of the 11th Battalion made the second amphibious assault landing of the Australian Imperial Force. A company from the 11th Battalion under the command of Captain Brennan mounted the AIF’s first raid of the war against Turkish positions at Gaba Tepe. Turkish forces saw their boats and although they landed they immediately suffered heavy casualties. If not for a courageous landing by two navy picket boats the Company would have been lost. After this raid, the 11th Battalion was heavily involved in defending the front line of the ANZAC beachhead at Bolton’s Ridge. The author, has included in Game To The Last some nice ‘before and after’ photographs of the 11th Bne men on Bolton’s Ridge Gallipoli. In August, the 11th Bne made preparatory attacks at the southern end of the ANZAC position before the Battle of Lone Pine. The 11th Battalion continued to serve at ANZAC until the evacuation in December.

A highly regarded military history about the men of the 11th Battalion AIF from formation in Western Australia to the end of the Gallipoli Campaign. Game To the Last casts its net wide to find and tell these men’s stories and is the culmination of many years’research. Author James Hurst has visited the men’s training grounds and battlefields, homes and graves. Many previously unpublished personal accounts provide the heart of the narrative, while extensive research provides context and colour. This is a story about sons, brothers, husbands who became soldiers in a bloody war on foreign soil. Their experiences are documented and retold with admiration and respect, and remind the reader of the human face of war.

Click to read more about the 11th Battalion AIF