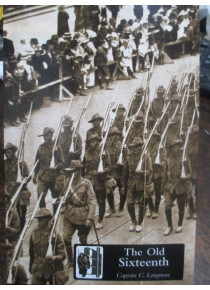 OLD SIXTEENTH BEING A RECORD OF THE 16th BATTALION MILITARY BOOK

The Old Sixteenth Being a Record of the 16th Battalion AIF During the Great War 1914 - 1918 ' by Captain C. Longmore. New Book softcover version.

The Old Sixteenth Being a Record of the 16th Battalion AIF During the Great War 1914 - 1918 ' by Captain C. Longmore.
This is the Official Battalion History compiled and written by Longmore in association with the 16th Battalion History Committee. This book was first published in 1929. The book being offered is a  professionally produced reprint of that history. It is a softcover reproduction of the 1929 edition. This book follows the 16th Battalion 1st AIF history from its formation in Western Australia. The training in WA then Broadmeadows Victoria and latter Egypt. The Battalion contributed to the first day landing at ANZAC Cove on Gallipoli Peninsular. Afterwards providing valuable defence of ANZAC at Quinns and Hill 971.
The 16th Battalion then took part in the many Battles on the Western Front.
The book includes many B/W battle prints. This history also has full soldier named Nominal Roll by Company and Reinforcements. Other appendixs include ; Officers named who were Promoted from the Ranks, Officers named captured by the Enemy , Officer Named Casualties Listed by order Battle , Casualties in Infantry by Division number only , Casualties Infantry in 16 Battalion by number, Battalion members decorations named list. Full Soldier named Nominal Roll at Evacuation of Gallipoli in order of Company

This was the famous battalion that Major Percy Black was a member. Black was said to be the 'Bravest Man in the AIF'. This gallant soldier fell unto glory at the Battle of Bullecourt 1917. His friend Harry Murray (Mad Harry - the highest decorated Soldier of WWI ) later said of his passing, "He was the bravest man I ever knew and I knew hundreds of them!"
This 16th Battalion book is dedicated to Major Percy Black a much loved member of this Battalion.