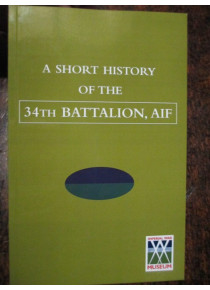 This military book is a concise short record covering the services of the 34TH BATTALION  from formation in 1916 through to the final stages of the war. In a semi-diary form, it deals with the Bn's role in the battles of Messines, Ypres, Passchendaele, and the Hindenburg Line. A list of officers who served, Roll of Honour (officers only) complete this useful part small history.﻿

The battalion was formed in January 1916 as part of the 9th Brigade of the Australian 3rd Division. The bulk of the battalion’s recruits were drawn from the Maitland area and thus it was dubbed “Maitland's Own”. The first recruits for the 34th, however, hailed from the far north-west of the state and arrived at Maitland after joining a recruiting march that began at Walgett. These men were known as the “Wallabies”﻿.......
TO READ FURTHER WIKIPEDIA PAGE ABOUT THE 34TH BATTALION CLICK